The greatest mistake made by conservatism was its overly close relationship with neo-classical economics. This was a marriage of convenience: finding themselves Johnny-no-mates in the academic world, the conservative establishment hastily bunked up with the only group of social scientists who were prepared to talk to them.

This cohabitation was not only unhealthy but boring. Economics is obsessed with a very narrow definition of efficiency, beyond which it can see no other virtues. It hence turns political rhetoric into a slightly Aspergic narrative about efficiency and growth — as though Churchill had urged us to fight the second world war ‘to regain access to key export markets’.

But this efficiency obsession also leads conservatives to defend free market capitalism on fallacious grounds. In truth free markets are not really efficient at all. Admiring capitalism for its efficiency is like admiring Bob Dylan for his mellifluous singing voice: it is to hold a healthy opinion for an entirely ridiculous reason.

The market mechanism is loosely efficient. But the idea that efficiency is the main virtue of free markets is wrong. Competition itself is highly inefficient. In my home town, I can buy food from about eight different places; I’m sure this system could be much more ‘efficient’ if Waitrose, M&S and Lidl were forcibly merged into one huge ‘Great Grocery Hall of The People No. 1306’. I am equally confident that after a few initial years of success, the shop would be terrible.

The missing metric here is semi-random variation. Truly free markets trade efficiency for a costly process of market-tested innovation heavily reliant on dumb luck. The reason this inefficient process is necessary is that, though we pretend otherwise, no one knows anything about anything: most of the achievements of consumer capitalism were never planned; they are explicable only in retrospect, if at all.

The reason to avoid communism is not because it is inefficient, but because it tries to be too intelligent. Communism might be able to build a boring bridge or lathe factory, but it could never have created Red Bull: no bureaucracy could ever muster the level of insanity necessary to try charging £2 for a slightly disgusting drink in a tiny can. Its popularity defies explanation: it is the duck-billed platypus of the carbonated drinks world.

It’s not just that we don’t know what we want: we don’t even know why we value the things we already have. Most people think they own a dishwasher to clean crockery. But perhaps the greatest value you get from owning a dishwasher is that it gives you somewhere to keep dirty dishes out of sight. (More controversial is my theory that cycling is an excuse for Lycra fetishists to appear in public.)

The fact that we don’t consciously know why we do what we do is crucial. Amazon’s stock-market valuation has just crept above Walmart’s, even though its sales are barely 15 per cent of its larger competitor’s. People who admire only efficiency (i.e. almost everyone in finance) cannot help but see Amazon as a more efficient alternative to Walmart, and invest on that premise. But their definition of retail efficiency may be dangerously narrow. People go shopping not only to buy things, but for the small social interactions afforded by leaving the house. The assumption that the ‘more efficient’ but impersonal online model will always triumph may be wrong.

The guarantee of a pleasant social interaction to anyone possessed of a £5 note may, in fact, be the single greatest defence of free markets. Put simply, capitalism pays people to be nice. A Chinese proverb sums it up perfectly: ‘If you find it difficult to smile, do not open a shop.’ 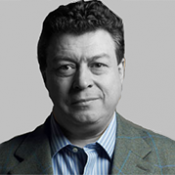 Rory Sutherland is the Executive Creative Director of OgilvyOne and Vice-Chairman of Ogilvy Group UK, part of the Ogilvy & Mather group of companies and author of The Wiki Man, he is regarded as one of marketing and advertising's most original thinkers and inspirational speakers. Twitter: @RorySutherland
Share This Article
Share with your friends
Submit