The economy needn’t be a war; it can be a commons. To get there, we must retrieve our innate good will.

The commons is a conscious implementation of reciprocal altruism. Reciprocal altruists, whether human or ape, reward those who cooperate with others and punish those who defect. A commons works the same way. A resource such as a lake or a field, or a monetary system, is understood as a shared asset. The pastures of medieval England were treated as a commons. It wasn’t a free-for-all, but a carefully negotiated and enforced system. People brought their flocks to graze in mutually agreed- upon schedules. Violation of the rules was punished, either with penalties or exclusion.

The commons is not a winner-takes-all economy, but an all-take-the-winnings economy. Shared ownership encourages shared responsibility, which in turn engenders a longer-term perspective on business practices. Nothing can be externalized to some “other” player, because everyone is part of the same trust, drinking from the same well.

If one’s business activities hurt any other market participant, they undermine the integrity of the marketplace itself. For those entranced by the myth of capitalism, this can be hard to grasp. They’re still stuck thinking of the economy as a two-column ledger, where every credit is someone’s else’s debit. This zero-sum mentality is an artifact of monopoly central currency. If money has to be borrowed into existence from a single, private treasury and paid back with interest, then this sad, competitive, scarcity model makes sense. I need to pay back more than I borrowed, so I need to get that extra money from someone else. That’s the very premise of zero-sum. But that’s not how an economy has to work.

The destructive power of debt-based finance is older than central currency—so old that even the Bible warns against it. It was Joseph who taught Pharaoh how to store grain in good times so that he would be able to dole it out in lean years. Those indentured to the pharaoh eventually became his slaves, and four hundred years passed before they figured out how to free themselves from captivity as well as this debtor’s mindset. Even after they escaped, it took the Israelites a whole generation in the desert to learn not to hoard the manna that rained on them, but to share what came and trust that they would get more in the future.

If we act like there’s a shortage, there will be a shortage.

Advocates of the commons seek to optimize the economy for human beings, rather than the other way around.

One economic concept that grew out of the commons was called distributism. The idea, born in the 1800s, holds that instead of trying to redistribute the spoils of capitalism after the fact through heavy taxation, we should simply predistribute the means of production to the workers. In other words, workers should collectively own the tools and factories they use to create value. Today, we might call such an arrangement a co-op—and, from the current examples, cooperative businesses are giving even established US corporations a run for their money.

The same sorts of structures are being employed in digital businesses. In these “platform cooperatives,” participants own the platform they’re using, instead of working for a “platform monopoly” taxi app or giving away their life data to a social media app. A taxi app is not a complicated thing; it’s just a dating app combined with a mapping app combined with a credit card app. The app doesn’t deserve the lion’s share of the revenue. Besides, if the drivers are going to be replaced by robots someday, anyway, at least they should own the company for which they’ve been doing the research and development. Similarly, a user-owned social media platform would allow participants to sell (or not sell) their own data, instead of having it extracted for free.

Another commons-derived idea, “subsidiarity,” holds that a business should never grow for growth’s sake. It should only grow as big as it needs to in order to accomplish its purpose. Then, instead of expanding to the next town or another industry, it should just let someone else replicate the model. Joe’s pizzeria should sell to Joe’s customers. If they need a pizzeria in the next town, Joe can share his recipe and let Samantha do it.

This is not bad business—especially if Joe likes making pizza. He gets to stay in the kitchen doing what he loves instead of becoming the administrator of a pizza chain. Samantha may develop a new technique that helps Joe; they can even federate and share resources. Besides, it’s fun to have someone else to talk with about the pizza business. They can begin to develop their collaborative abilities instead of their competitive ones.

Bigger isn’t necessarily better. Things in nature grow to a certain point and then stop. They become full-grown adults, forests, or coral reefs. This doesn’t mean they’re dead. If anything, it’s the stability of adulthood that lets them become participating members of larger, mutually supportive networks.

If Joe has to grow his business bigger just in order to keep up with his rising rent and expenses, it’s only because the underlying economy has been rigged to demand growth and promote scarcity. It is this artificially competitive landscape that convinces us we have no common interests.

We know that nothing in nature can sustain an exponential rate of growth, but this doesn’t stop many of our leading economists and scientists from perpetuating this myth. They cherry-pick evidence that supports the endless acceleration of our markets and our technologies, as if to confirm that growth- based corporate capitalism is keeping us on track for the next stage of human evolution.

To suggest we slow down, think, consider—or content our- selves with steady profits and incremental progress—is to cast oneself as an enemy of our civilization’s necessary acceleration forward. By the market’s logic, human intervention in the machine will only prevent it from growing us out of our current mess. In this read of the situation, corporations may be using extractive, scorched-earth tactics, but they are also our last best hope of solving the world’s biggest problems, such as hunger and disease. Questioning the proliferation of patented, genetically modified seeds or an upgraded arsenal of pesticides just impedes the necessary progress. Adherents of this worldview say that it’s already too late to go back. There are already too many people, too much damage, and too much dependence on energy. The only way out is through. Regulating a market just slows it down, preventing it from reaching the necessary level of turbulence for the “invisible hand” to do its work.

According to their curated history of humanity, whenever things look irredeemably awful, people come up with a new technology, unimaginable until then. They like to tell the story of the great horse manure crisis of 1894, when people in England and the United States were being overwhelmed by the manure produced by the horses they used for transportation. Luckily, according to this narrative, the automobile provided a safe, relatively clean alternative, and the streets were spared hip-deep manure. And just as the automobile saved us from the problems of horse-drawn carriages, a new technological innovation will arise to save us from automobiles.

The problem with the story is that it’s not true. Horses were employed for commercial transport, but people rode in electric streetcars and disliked sharing the roads with the new, intrusive, privately owned vehicles. It took half a century of public relations, lobbying, and urban replanning to get people to drive automobiles. Plus, we now understand that if cars did make the streets cleaner in some respects, it was only by externalizing the costs of environmental damage and the bloody struggle to secure oil reserves.

Too many scientists—often funded by growth-obsessed corporations—exalt an entirely quantified understanding of social progress. They measure improvement as a function of life expectancy or reduction in the number of violent deaths. Those are great improvements on their own, but they give false cover for the crimes of modern capitalism—as if the relative peace and longevity enjoyed by some inhabitants of the West were proof of the superiority of its model and the unquestionable benefit of pursuing growth.

These arguments never acknowledge the outsourced slavery, toxic dumping, or geopolitical strife on which this same model depends. So while one can pluck a reassuring statistic to support the notion that the world has grown less violent— such as the decreasing probability of an American soldier dying on the battle field—we also live with continual military conflict, terrorism, cyber-attacks, covert war, drone strikes, state- sanctioned rape, and millions of refugees. Isn’t starving a people and destroying their topsoil, or imprisoning a nation’s young black men, a form of violence?

Capitalism no more reduced violence than automobiles saved us from manure- filled cities. We may be less likely to be assaulted randomly in the street than we were in medieval times, but that doesn’t mean humanity is less violent, or that the blind pursuit of continued economic growth and technological progress is consonant with the increase of human welfare—no matter how well such proclamations do on the business best- seller lists or speaking circuit. (Businesspeople don’t want to pay to be told that they’re making things worse.)

So with the blessings of much of the science industry and its collaborating futurists, corporations press on, accelerating civilization under the false premise that because things are looking better for the wealthiest beneficiaries, they must be better for everyone. Progress is good, they say. Any potential impediment to the frictionless ascent of technological and economic scale— such as the cost of labor, the limits of a particular market, the constraints of the planet, ethical misgivings, or human frailty— must be eliminated.

The models would all work if only there weren’t people in the way. That’s why capitalism’s true believers are seeking some- one or, better, something to do their bidding with greater intelligence and less empathy than humans.

How Finance Behaves like a Parasite Toward the Economy
Capitalism(s), Alone
The Sacred Story of Capitalism, Retold
Solving the Crisis of Extractive Capitalism 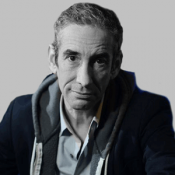 Douglas Rushkoff is the host of the Team Human podcast and author of Team Human as well as a dozen other bestselling books on media, technology, and culture, including, Throwing Rocks at the Google Bus: How Growth Became the Enemy of Prosperity. He is Professor of Media Theory and Digital Economics at CUNY Queens College.
Share This Article
Share with your friends
Submit