Remember Smaug the dragon, in The Hobbit? He hoarded up a vast pile of wealth, and then he just hung out in his cave, sitting on it (with occasional forays to further pillage and immolate the local populace).

That’s what you should think of when you consider the mind-boggling hoards of wealth that the very rich have amassed in America over the last forty years. The picture at right only shows the very tippy-top of the scale. In 1976 the richest people had $35 million each (in 2014 dollars). In 2014 they had $420 million each — a twelvefold increase. You can be sure it’s gotten even more extreme since then.

These people could spend $20 million every year and they’d still just keep getting richer, forever, even if they did absolutely nothing except choose some index funds, watch their balances grow, and shop for a new yacht for their eight-year-old.

If you’re thinking that they “deserve” all that wealth, and all that income just for owning stuff, because they’re “makers,” think again: between 50% and 70% of U.S. household wealth is “earned” the old-fashioned way (cue John Houseman voice): it’s inherited.

The bottom 90% of Americans aren’t even visible on this chart — and it’s a very tall chart. The scale of wealth inequality in America today makes our crazy levels of income inequality (which have also expanded vastly) look like a Marxist utopia.

Now of course you don’t expect 20-year-olds to have much or any wealth; there will always be households with none. But still, the environment for young households trying to build a comfortable and secure nest egg — the American dream? — has gotten wildly competitive and hostile over recent decades. (If we had a sovereign wealth fund, everyone would have a wealth share from birth.)

But here’s what’s even more egregious: that concentrated wealth is strangling our economy, our economic growth, our national prosperity. Wealth concentration drives a vicious, downward cycle, throttling the very engine of wealth creation itself.

Here’s one picture of what that looks like (data sources):

These broad quintile averages obviously don’t put across the realities of the very poor and the very rich; each quintile spans 25 million households. But the picture is clear. The bottom quintiles turn over 40% or 50% of their wealth every year. The richest quintile turns over 5%. For a given amount of wealth, wider wealth dispersion means more spending. It’s arithmetic.

Now go back to those top-.01% households. They have about $5 trillion between them. Imagine that they had half that much instead (the suffering), and the rest was spread out among all American households — about $20,000 each.

Assume that all those lower-quintile households spend about 40% of their wealth every year. They each get to spend an extra $8,000, and enjoy the results. Sounds nice. And it’s spending that simply won’t happen with concentrated wealth. The money will just sit there.

Now obviously just transferring $2.5 trillion dollars, one time, is not going to achieve this imagined nirvana. Nor is it bloody well likely to happen. That example is just to illustrate the arithmetic. Absent some serious changes in our wildly skewed income distribution (plus capital gains, the overwhelmingly dominant mechanism of wealth accumulation, which don’t count as “income”), that wealth would just get sucked back up to the very rich, like it has, increasingly, for the past forty years — and really, the past several thousand years.

If wealth is consistently more widely dispersed — like it was after WW II — the extra spending that results causes more production. (Why, exactly, do you think producers produce things?) And production produces a surplus — value in, more value out. It’s the ultimate engine of wealth creation. In this little example, we’re talking a trillion dollars a year in additional spending and production. GDP would be 5.5% higher.

If you want to claim that the extra spending would just raise prices, consider the last 20 years. Or the last three decades, in Japan. And if you think concentrated wealth causes better investment and greater wealth accumulation, ask yourself: what economic theory says that $95 trillion in concentrated wealth will result in more or better investment than $95 trillion in broadly dispersed wealth? Our financial system is supposed to intermediate all that, right?

Or ask yourself: would Apple be as successful as it is if its business model was based on selling eight-million-dollar diamond-encrusted iPhones? Broad prosperity is what made Apple, Apple. Concentrated wealth distorts producers’ incentives, so they produce, for instance, a million-dollar Maserati instead of forty (40) $25,000 Toyotas — because that’s what the people with the money are buying. Which delivers more prosperity and well-being?

This little envelope calc is describing a far more prosperous, comfortable, and secure society — far richer and and one hopes far more peaceful than the one we’re facing under wildly concentrated wealth. With the possible exception of a few very rich multi-generational dynasties, everyone’s grandchildren will be far better off 50 years from now if wealth is more widely dispersed. And over that half century, hundreds of millions, even billions of people will live far richer, better lives.

Why wouldn’t we want that? Why wouldn’t we do that? (We know the answer: rich people hate the idea — even those who aren’t all that rich but foolishly buy into the whole trickle-down fantasy. And the rich people…have the power.)

By contrast to that possibility, here’s what things look like over the last seven decades: 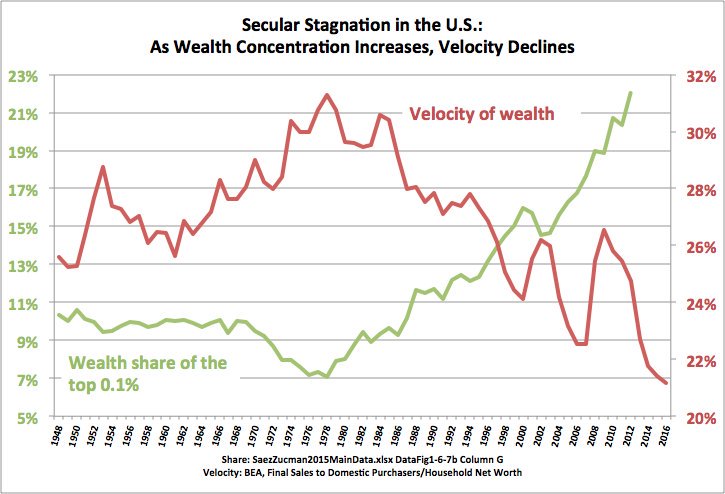 Here are the results — growth in inflation-adjusted GDP per capita: 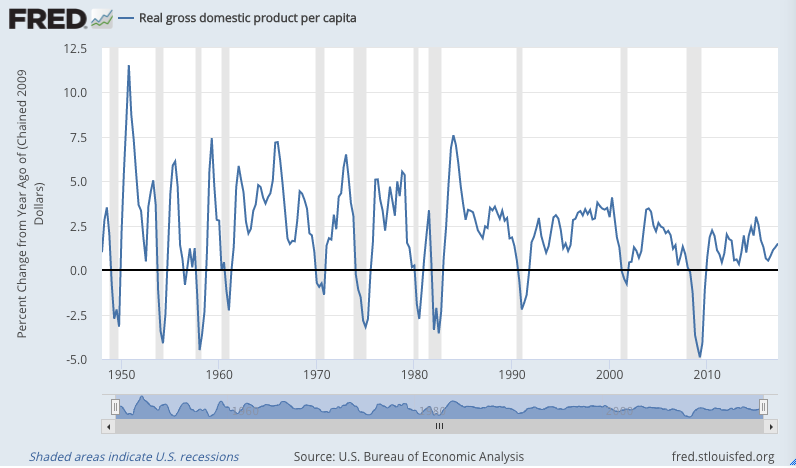 The last time economic growth broke 5% was in 1984. And the decline continues.

So how do we get there, given that we’ve mostly failed to do so for millennia? Start with a tax system that actually is progressive, like we had, briefly, during the postwar heyday of rampant and widespread American growth and prosperity. And greatly expand the social platform and springboard that gives tens of millions more Americans a place to stand, where they can move the world.

All of this dweebish arithmetic, of course, doesn’t put across the real crux of the thing: power. Money is power. So it is, so it has been, and so it shall be in our lifetimes and our children’s lifetimes (world without end, amen). This is especially true for minorities, who have been so thoroughly screwed by our recent Great Whatever. Money is the power to walk away from a shitty job. To hire fancy lawyers and lobbyists, maybe even buy yourself a politician or two. If we want minorities to have power, they need to have money.

Add to that dignity, and respect, which is deserved by every child born: sadly but truly, they are delivered to those who have money. You can bemoan that reality, but in the meantime, let’s concentrate on the money.

If you want to create a workers’ utopia, a better world for all, seize the wealth and income.

The data for the tall chart is from Gabriel Zucman, PSZ2016AppendixTablesII(Distrib).xlsx Table TE3. Google sheet with data and chart here.

Average wealth by quintile is from the Federal Reserve’s Survey of Consumer Finance (SCF), scf2013_tables_internal_nominal.xls, Table 4. (Top 20% wealth in the table above is an average of the means for 80-90% and 90-100%.) The most recent triannual SCF release, covering 1989-2013, determined the year chosen for the table. The next release, through 2016, should be out imminently.

Note: Measuring expenditures is very difficult, especially the spending of the very rich. They’re not keen to answer lengthy surveys like the CEX, given that they don’t even want their housekeepers to know that they paid $6 for a loaf of bread. As a result, CEX — which breaks out spending by quintile — misses about 40% (xlsx) of the spending tallied in the BEA’s Personal Consumption Expenditures (PCE) — which doesn’t. As a rough corrective for that discrepancy, the spending-by-quintile figures in the table above are CEX measures multiplied by 1.66. This “PCE correction” results in far more plausible spending figures, especially for the top 20%: Average $165,000 in 2103 annual spending versus CEX’s $100,000.