By David Brin and Michael Hudson

Evonomics is burgeoning rapidly into the go-to place where sane-insightful sages discuss what’s gone wrong with modern capitalism. Not from any leftist or hostile perspective, but with an eye to rescuing the goose that has laid our golden eggs — truly creative-competitive enterprise. These top folks refute the notion that our struggles are “left vs right.” Market economics can be saved, and generate the vast (and efficient) wealth enabling us to redouble generosity, if it is again made to be flat-open-fair.

Take this interview with Michael Hudson, author of Killing the Host: How Financial Parasites and Debt Bondage Destroy the Global Economy. Wherein the agenda is not to oppose competitive capitalism… rather the parasitical manipulators who Adam Smith himself denounced as markets’ worst enemies… and have been for 6000 years.

Prof. David Sloan Wilson interviews Lynn Stout – Distinguished Professor of Corporate and Business Law at the Cornell – on the hoary mythology spread decades ago by Milton Friedman, that the only purpose of a modern corporation is to maximize short term value to stockholders. A cancerous dogma that is at last being dissected, disproved on every level and demolished.

For example, Wilson cites a major study which monitored the survival of 136 firms starting from the time they initiated their public offering on the U.S. Stock Market. Five years later, the survivors—by a wide margin—were firms that did best by their employees.

Other critics show that Friedman’s cult encourages companies into short-term thinking and stock buy-backs instead of investing in new products – eating their seed corn – which is exactly the opposite of what we were promised by “supply side” zealots. Then there are “externalities” where corporations will ignore the needs of our children (e.g a less-toxic planet) unless regulated into taking such factors into account, in pricing.

Sure, oligarchs want oligarchy. But can it be smart?

Here’s a perfect IQ test for the 0.001% aristocrats. Are you uber-oligarchs capable of noticing when greed may tip way beyond mere economic stupidity and immorality into life threatening self-destruction? When – as happened many times in the past – insatiable top-down class war could wind up taking you on a tumbrel ride toward guillotines

This fascinating open letter from a rich man to his fellow zillionaires makes a point that was stated eloquently by Joseph Kennedy, to explain why that ruthlessly self-serving mogul supported FDR during the Great Depression: “I’d rather lose half my fortune to help raise a healthy and contented middle class than lose it all to revolution.”

In other words. Self-interest should look to farther horizons.  Hence, looking ahead, Nick Hanauer – a Seattle-based entrepreneur and early Amazon investor – published an “Ultra-rich man’s letter: To My Fellow Filthy Rich Americans. The Pitchforks Are Coming.”

“Seeing where things are headed is the essence of entrepreneurship. And what do I see in our future now? I see pitchforks. At the same time that people like you and me are thriving beyond the dreams of any plutocrats in history, the rest of the country—the 99.99 percent—is lagging far behind…. Unless our policies change dramatically, the middle class will disappear, and we will be back to late 18th-century France. Before the revolution.”

Nor is Hanauer alone. Among U.S. billionaires and sub-billionaires, those who got rich through technological innovation, through delivery of new and popular goods and services, have increasingly expressed the same worry.  They became wealthy working side by side with creative, middle class engineers, scientists, artists, etc. Moreover, they increasingly find present trends — set in motion largely by “supply side” so-called ‘economics’ — to be deeply destructive and dangerous voodoo.

Which is ironic to a stunning degree; they are the only billionaires who did use Bush tax cuts to invest in productive innovations and goods. Yet they are nearly all now democrats, calling for an end to those tax cuts.   It is the other branch of uber-wealth — those who got it via Wall Street parasitism, resource extraction-exploitation, capturing regulators or inheritance — who seem mostly unable to read the writing on the wall.  While congratulating themselves that they are geniuses, they happily ignore lessons of history.

I might add that any ‘angry peasants’ in the future will be far better armed than the 1789 Jacobins. Forget torches and pitchforks. Many will have fancy tools of cyber or genetic or chemical engineering. ISIS is a joke compared to what an enraged American technical caste could do, if (no, when) they ever wake up and rediscover that every human generation except the Baby Boomers knew class war.

Boomers grew up in an illusion of classlessness because the Rooseveltean reforms enacted by the Greatest Generation were so spectacularly successful! And another such moderate/pragmatic reset is still possible, reviving healthy-competitive market enterprise while re-invigoration the great middle. That is, if the oligarchy listen to folks like Hanauer.

Nor is Hanauer alone. We know that most of the tech billionaires have joined Warren Buffet in rejecting the winner-takes-all mantra of Fox-style economics. But how about midwest agri-business leaders?

Greg Page is executive chairman and former CEO of Cargill, Inc., the largest private company in the U.S. Page participated in the high-level “Risk Committee” of top business leaders that forecast the US economy could suffer damages running into the hundreds of billions of dollars by the end of the century due to climate change.

Page describes the northward movement of the American agricultural belt. As average temperatures have risen over the past decades, the growing season in the northern plains has expanded, while heat waves further south baked America’s traditional agriculture producing states like Iowa, Oklahoma, Nebraska and Texas.

These explorations continue on Evonomics. In this article economist Sally J. Goerner elucidates why the “Trump-Sanders Phenomenon Signals an Oligarchy on the Brink of a Civilization-Threatening Collapse.” Goerner maintains that: “oligarchies always collapse because they are designed to extract wealth from the lower levels of society, concentrate it at the top, and block adaptation by concentrating oligarchic power as well.”

History shows that this tendency can be periodically corrected. If done in a moderate but determined way, the public will mobilize behind honest leaders and effective reforms.

Or as Will and Ariel Durant wrote in The Story of Civilization: “…the unstable equilibrium generates a critical situation, which history has diversely met by legislation redistributing wealth or by revolution distributing poverty.”

Of course we know why the oligarchy has tried so hard to turn lower middle class anger toward all the meritocratic professions. Especially toward the technology castes. Get working class whites to despise modernity and scientists, doctors, teachers, journalists, economists, civil servants… hey it worked in 1930s Germany and in the Confederate south. And look how well those turned out.

This is why the tech billionaires… most of them… are democrats nowadays. As would be Adam Smith, if he were alive today. They want an FDR to get them out of this bind, and not a Robespierre. And it is why we must pry the hands of the other kind of oligarch — those who fail this IQ test — off of society’s tiller. If theses guys are so rich, why ain’t they smart?

What they’d be doing now, if they truly were smart

Some of you may recall a scene in Existence, set at a Swiss Alps meeting of the Trillionaires’ oligarchy? I portrayed what I think aristos would be doing now, if they were both smart and wanted to restore feudalism, without repeating the same damned mistakes that feudalism made across 6000 years.

Do I oppose feudalism? With all my soul. But so did Machiavelli, fighting for the Florentine Republic. Then, when it was clear there was no hope at all and all was finished, he got employment trying to talk the artistos into at least being smart about it. (Hint, I am willing, under carefully defined circumstances, to consult discretely on this matter, with some exceptional suggestions… accompanied by a wagging of fingers. And if finger-wags deter you guys from seeking the best ideas – and I have the best – then you’ll deserve what inevitably happens to you.)

Alas, there’s a quandary here. The smartest billionaires today want nothing to do with feudalist trends. But feudalist trends are powerful in themselves and favor the dumb rapacious kind. The type who will never hold meetings of the kind I portrayed in Existence.

Indeed, it is doubtful that many of them read. Yet they hire flatterers to tell them how smart they are.

Thus proving the very opposite.

How shall we measure politics? According to hoary, insipidly lobotomizing metaphors like “left-vs-right,” which none of you could properly define, even if your lives depended on it.

Or according to what we really need, today, which is pragmatic flexibility – a willingness to drop stale dogmas and do what’s right for our children and the world. Okay, then dig this… the Obama Administration – backed up my many modern environmentalists –is exploring ways to help the U.S. nuclear industry survive and keep reactors running, to weather hard times brought by cheap natural gas.

Mind you, that cheap gas is a huge improvement over relying on filthy coal. And the long term solution is looming fast, with solar, wind, tidal and storage power becoming economical faster than even optimists expected. Still, nuclear is now viewed much more favorably by techno-liberals, starting some years ago with Stewart Brand and others, but increasingly by mainline environmental groups.

Oh, they are still wary!  And problems with spent fuel are worrisome. And we can argue which newer “better” fuel cycles deserve investment. But keeping currently clean, already running nuclear plants going would seem blatantly in our interest.

Moreover, this shift by liberals is diametrically opposite to their political opponents on the right, who cannot even begin to ponder changing their minds in the face of evidence. About anything. Ever.

And that – rather than any “left” or “right” nostrum – is the real difference in U.S. politics today. 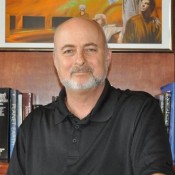 David Brin is an astrophysicist whose international best-selling novels include The Postman, Earth, and recently Existence. His nonfiction book about the information age - The Transparent Society - won the Freedom of Speech Award of the American Library Association. davidbrin.com
Share This Article
Share with your friends
Submit