By Jonathan Tepper and Denise Hearn

While Hollywood loves movies like King Kong and Godzilla, there is a good reason these fantastical creatures don’t exist in real life. As J.B.S. Haldane put it in his classic essay, “On Being the Right Size,” “You can drop a mouse down a thousand-yard mine shaft; and, on arriving on the bottom, it gets a slight shock and walks away . . . A rat is killed, a man broken, a horse splashes.” This is the key to the problem of scaling.

The size of an object determines its structure. The biological principal is referred to as the square-cube law. As a shape grows in size, its volume grows faster than its surface area. As an animal’s size increases through evolution, their structure has to strengthen more than proportionally. This explains why it is so difficult to build ever-taller skyscrapers and why King Kong would shatter his thighbone if he tried to walk. Big animals like hippos need much fatter legs than dogs do.

There isn’t a formal square-cube law in economics but the general idea holds. Companies scale much like organisms do. Small, rapidly growing businesses are the most productive, and giant businesses are less nimble than startups. It should not be surprising that when Louis V. Gerstner Jr. wrote about turning around IBM, he titled his book Who Says Elephants Can’t Dance? The book became a best seller, precisely because businessmen know that big companies are lumbering giants.

Today, those giants dominate the economic landscape.  Yet GDP growth has been anemic, at best. Large corporations have been hoarding almost $2 trillion dollars, primarily offshore, yet corporate investment levels are dismal by historical standards. Corporations prefer share buybacks to raising wages or investing. Economists cannot figure out what ails the patient.

Finding the source of our ills is critical. The stakes for the health of the US economy could not be greater. Why has the rate of startup creation declined? Why are wages not rising? Why is productivity low and not rising? Why has inequality been increasing?

Many politicians and economists think the problem is the tumor of income inequality, but the answer is that the US economy has large parasites that are sapping nutrients and robbing the country of its energy. Industries have become increasingly concentrated over the last few decades, with a few dominant firms controlling entire industries. We’re in a new Gilded Age. More on that here. Monopolies and oligopolies won’t kill the economy, but they can cripple it.

The only people who should be happy with the situation we have today are people who own shares in monopolies. Egalitarians should be appalled by higher inequality. Free market conservatives should be horrified by less competition, economic stagnation, lower productivity, and less investment. Everyone should be concerned about the concentration of economic and political power in the hands of very few.

Almost all the focus in industrial concentration has been on profits, productivity, and investment, but the biggest impact has been on wages. Workers have systematically lost power versus large companies that now dominate industries.

Dozens of studies now document how industrial concentration is driving income inequality. The smoking gun, however, has been missing. Researchers had the intuition but could not prove that monopsonies, particularly at the local level, affected consumer wages.

Recently, economists have begun to look into the problem of labor market monopsony to find out just how bad the situation is.

The evidence is depressing. Economists Marshall Steinbaum, Ioana Marinescu, and José Azar looked at job markets across the United States to see how concentrated employers were. They found that most commuting zones where workers would search for a job were highly concentrated, and this dragged down wages. The results of wage decreases were extremely troubling. They showed that going from a very competitive to a highly concentrated job market is associated with a 15–25% decline in wages.

The market for goods is national, while job searches happen locally. This helps explain why ideal, perfectly competitive markets are in fact a myth. Steinbaum’s study shows that this insight is correct. He and his colleagues note, “The most concentrated labor markets, and the ones where the effect of concentration on wages is largest, are the rural ones.”

Companies can pressure workers in many ways to drive down pay. Economists Jason Furman and Alan Krueger have shown that many firms are able to suppress wages through monopsonistic behavior, such as collusion, noncompete agreements, and barring employees from class action lawsuits. In 2015, Jonathan Baker and Steven Salop identified market power as a likely contributor to the growth in US wealth inequality. Lina Khan and Sandeep Vaheesan have noted how monopoly pricing is a form of regressive taxation that turns the disposable income of the many into capital gains, dividends, and executive compensation for the few. “Evidence across a number of key industries in the United States indicates that excessive market power is a serious problem.”

Some monopolies pay very well for the lucky few. Pay tends to increase with size of the firm. Professor Holger M. Mueller of New York University and his colleagues found that wage differences between high and low-skill jobs increase with firm size. They also demonstrated that there is a strong relation between the change in firm size and rising wage inequality for most developed countries. They note that what many interpret as a broad move toward more wage inequality may be driven by an increase in employment by the largest firms in the economy.

The trend toward larger companies is driving a wedge between the few at the top dominant companies who are paid spectacularly well and the majority of Americans whose wages are stagnant. Economist David Autor and his colleagues concluded in a recent paper that the rise of “superstar” firms with high profits and relatively small workforces has contributed to the shrinkage in workers’ share of national income and a corresponding increase in the share of profits.

Passing on cost savings to consumers is a wonderful story that has no basis in reality. Dozens of economic studies have shown that businesses don’t get more efficient after a merger. The simple truth is that they make more money because they gain market power and can get away with higher prices. Professor Rodolfo Grullon found in his major study on industrial concentration that there is no clear relation between the efficient use of assets and concentration. The main reason companies made money was because they had market power.

A recent paper by economists Justin Pierce of the Federal Reserve Board of Governors and Bruce Blonigen of the University of Oregon shows that mergers cause higher prices with little evidence of greater productivity and efficiency. They also looked in great detail at whether mergers increased efficiency through reductions in administrative costs and greater asset productivity, but again find little evidence for these grand claims. This corroborates the work of the economists Jan de Loecker and Jan Eeckhout who charted a rise in corporate markups from 18% in 1980 to 67% today. In plain English, companies’ profit margins go up because they can raise prices, not because they’re more efficient.

The proof is so overwhelming that it begs the question why antitrust authorities have allowed firms to merge. Firms always lobby to plead their case with regulators and legislators, arguing they will exercise their market power responsibly. Firms use economists for hire to create models “proving” that mergers will lower prices. But once mergers go through, prices mysteriously go up. These remind us of New Year’s resolutions to lose weight. They sound great at the time but quickly fade away as soon as donuts and pizza show up.

Adapted from The Myth of Capitalism: Monopolies and the Death of Competition (Wiley, Nov. 2008)

The Invisible Hand Won't Solve the Climate Crisis. Capitalism Must Evolve.
Can We Fix Capitalism in the Age of Trump and Brexit?
The Future of Work, Robotization, and Capitalism’s Ability to Generate Useless Jobs
How to Create a Bottom-Up Stimulus Machine to Fix Capitalism 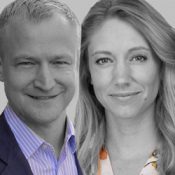 Jonathan Tepper is a founder of Variant Perception, a macroeconomic research group that caters to asset managers. Denise Hearn is Head of Business Development at Variant Perception - a global macroeconomic research and investment strategy firm. She has an MBA from the Oxford Saïd Business School, where she co-chaired the Social Impact Oxford Business Network. Follow: @denisehearn_ @jtepper2
Share This Article
Share with your friends
Submit