By Lixing Sun and Shine Sun

It’s a no brainer to think that talents lead to high performance. That’s why we go after them with money. But does it work for a team? Not necessarily, at least for the English Premiere League (EPL). In the 2015-2016 season, the David, Leicester City FC, shocked the soccer world by beating the miniscule odds of 1 to 5,000 to win the championship. With only a total of £57 million spent in salaries, it humbled a bevy of big-spending goliaths—Chelsea (£215 million), Manchester United (£203 million), Manchester City (£193.8 million), Arsenal (£192 million).

What about American football? The answer is less obvious, but we have found it by delving into the 22 years of NFL salary data from 1995 to 2016 posted on Foxsports.com. If we assume salary is an honest price tag of talent, a team spending more on salaries should do better, right? Right! Money indeed ties positively to win rate. Unfortunately, the relationship is so weak (R2=0.0103) that you can barely tell an upward tick in slope (0.00797), a measure for what you get out from what you put in. In fact, if you boost your spending by 10%, 20%, or 30% more than the league average, for instance, you will only up your win rate from the average of 50% by only 2%, 4%, and 6%, respectively. Doubling your money on team salaries will only give you a win rate of 69%. To push for 80%, you need to out-spend the league salary average by 174%![1] Looking at the near-random scatter plot below, you know that money can’t realistically help in team performance. So the punchline: talent is overrated. 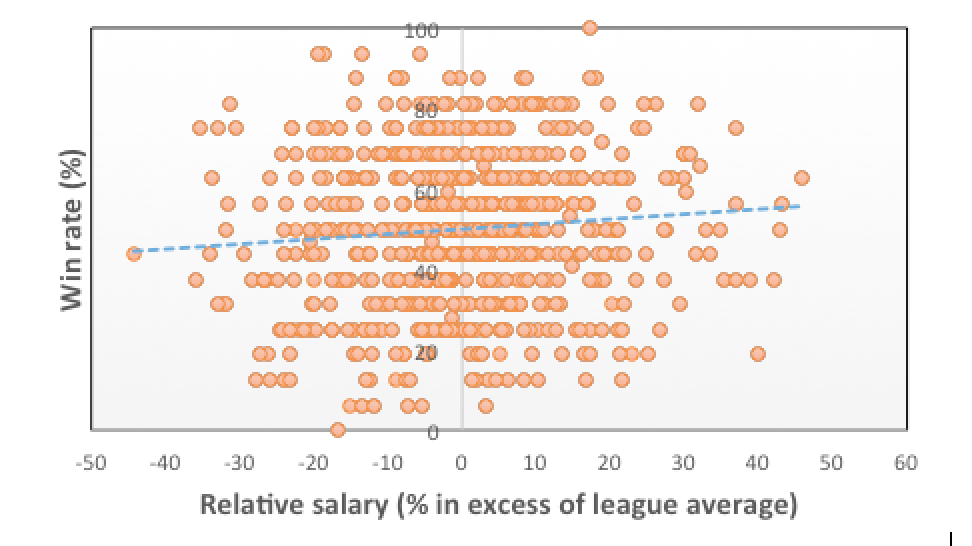 If money doesn’t buy performance, what else can you do to help your team? One practical measure is to promote salary fairness among team members. Our analyses show that unlike team salaries for the league, salary inequality within a team has no linear relationship with team performance. Still, it can significantly jeopardize win rate.[2] This makes intuitive sense when we consider human nature. Team members who see their salaries too far below others may hold grudges.[3] If they aren’t so irked as to deliberately sabotage the team, they can at least be less willing to put all effort into the competition. This can make a huge difference in cutthroat pro football games. (Think about a wide receiver dropping one more catch or a running back making one less yard than otherwise.) On the contrary, a franchise with a good team chemistry may beat unfavorable odds. That’s why we see Cinderella teams win all the time. That’s why fairness can bolster team performance.

Are big stars useless in team sports? No, of course not! Every football fan knows the key role of quarterbacks (QBs), especially in leadership. No team can do well with a lousy QB. That’s probably the reason why most NFL franchises pour their money into chasing high profile QBs. While there is no denying a good QB is critical, our analyses, however, show that pursuing star QBs with money doesn’t help team performance.[4] (Desperate in finding the next Tom Brady, you may well likely end up with the next Drew Brees or Philip Rivers.) All in all, while high paying QBs do lead to more wins (R2=0.0315), the gain is so little (slope=0.00267) that if you double, triple, or quadruple their pays of the league average, you can only raise your win rate from 50% to 57%, 63%, and 69%, respectively. To up your win rate to 80%, you need to pay 519% more to your QB than the league average. 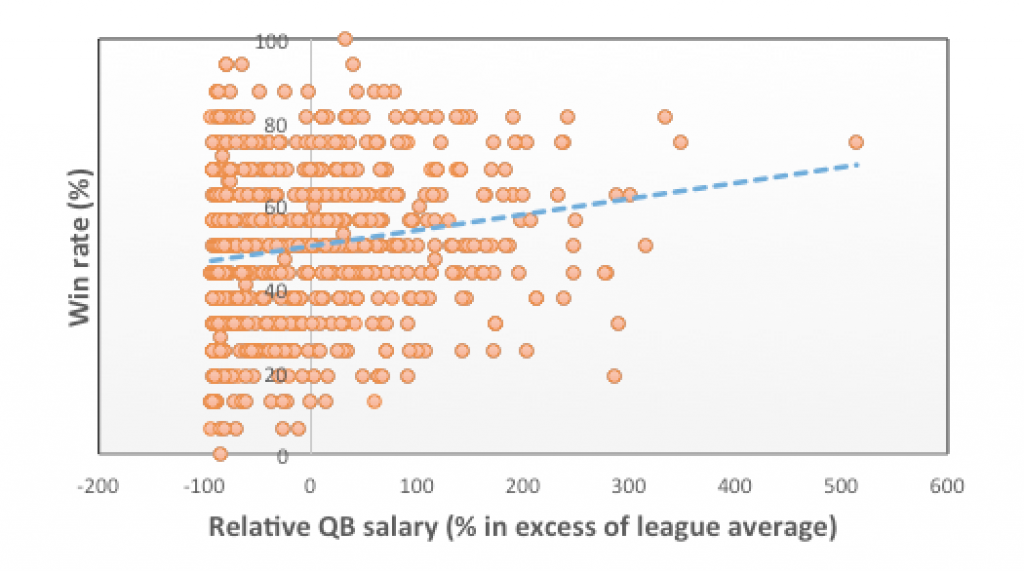 Moreover, when you pay your star QB more, you may have to cut back your spending on other players. As salaries among team members are increasingly polarized, now we have a sure recipe for deflating the esprit de corps of the team. It comes to no surprise that franchises spending most on their QBs rarely perform superbly. What you can expect from your high-paying QB is some stability during the regular season as shown in the chart below. So, money spent on QBs only buy you a mediocre team performance. 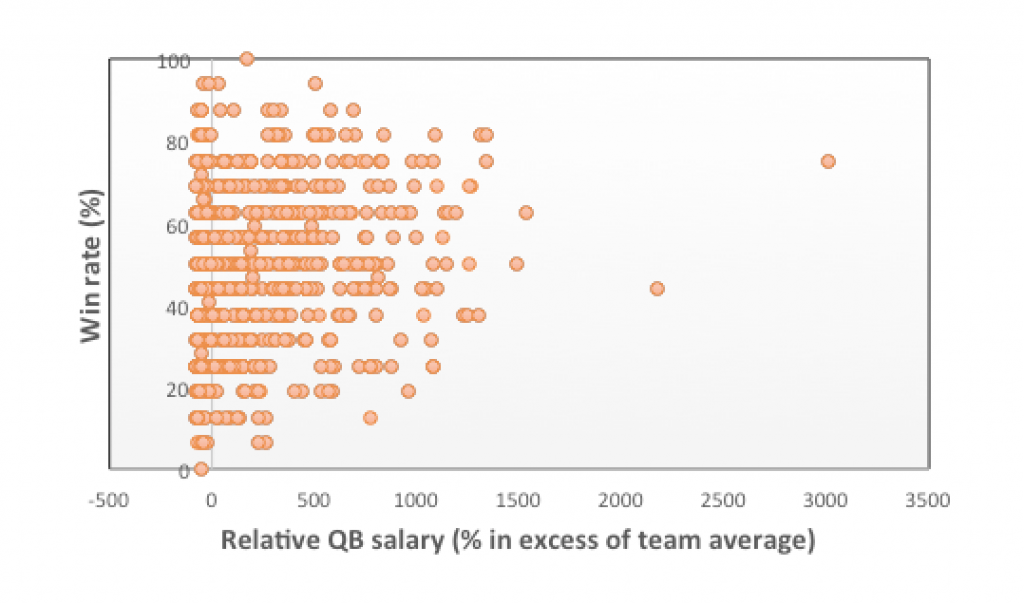 Unlike the NFL, clubs in European football leagues are uncapped in spending. Were money almighty for team performance, it would be even more unlikely for little guys like Leicester City to rise up. How could Leicester City beat the nearly impossible odds? A study in Germany reveals a secret of team success in football (soccer). You can build a strong team in two ways: either pour your money on getting big-name stars, or focus on strengthening team chemistry. The latter was exactly the route Leicester City took to its “unlikely” EPL championship. The myth is solved.

Tied up by a cap system in the NFL, you can’t spend as lavishly as you wish like your European counterparts. As your road to victory by outspending your rivals is blocked, you are forced to take the alternative route, paying more attention to team-building. That’s why salary equality can become an even more important factor in team performance.

As you can see now, if you want your team to succeed, you shouldn’t forgo using money in getting talent. But overdoing it, you waste your money. This can’t be better illustrated by none other than Leicester City FC a year after their championship. In the 2016-17 season, Leicester City was doing so poorly that in Week 25, two-thirds into the season, they logged only 5 wins with 14 losses. Ranked the 17th out of 20 teams in the league, the club was sticking its neck just above the relegation territory as the bottom three teams would be kicked out of the EPL to a lower league. The reason: player disloyalty for the team. Several members mistook team success a season earlier as their personal talent. Rather than putting all-out effort for the team, they were dipped in self-pride, thinking they were big stars and deserved a lot more if traded to big-name clubs. Only after their legendary coach, Claudio Ranieri, a big hero one year before, was fired, did the players get a wakeup call and start playing like a team again. The result was instantaneous: they picked up five consecutive wins afterward and eventually survived the disgrace of relegation.

Two takeaways from our analyses. First, team success takes much more than individual talent. Yet we are often deluded to think that talent is everything, which in turn can be bought with money. The reality is that the value of individual talent can be quite limited in team sports (and other collective ventures as well). Salary fairness, for instance, can also play a significant role in fueling team chemistry and boosting team performance. Second, even with money and salary fairness combined, they account for only a minor fraction of who wins and who loses. Much of the outcome hinges on a myriad of other factors, making the result unpredictable. And that’s the beauty of sports.

[1] We used logit regression to analyze the effect of salary on (the natural logarithm of) winning odds for the 32 teams in the National Football League during the regular season. Although an NFL team consists of 53 players, we only included the salary data of the top 50 players in our analyses. This allows us to exclude a few bench players with extremely low salaries.

[3] Some star NFL players may also have lucrative commercial deals, but these deals are often inconspicuous or even unknown. Salaries, on the contrary, are public information, known to all team members. As such, they should be most likely to provoke a sense of unfairness for especially low-paying team members, which in turn influences team performance.

[4] Only starting QBs who played a half (8) or more games in a season were included in our analysis.

Do You Care Enough About Future People to Leave Them a Livable Planet?
The Origins of Human Fairness
The Racism of Neoliberalism
People Don't Actually Want Equality. They Want Fairness.