A year ago, as the “Greek Tragedy” was unfolding, I posted on my blog, Is this the Beginning of the End for the European Union? The outcome of the EU membership referendum in UK suggests that the break-up process is gathering steam. I didn’t predict a vote of “yes” in the “Brexit” referendum (I thought it would be narrowly defeated). But as I pointed out in last week’s post, Will the European Union Survive its 60th Anniversary?, written the day before the referendum, Brexit is only one of many signs of how the political landscape within Europe has been tilting.

A disintegrative tendency has been gathering steam over the last 5-10 years, well before UK Prime Minister David Cameron had rashly set the referendum on whether UK should leave the EU in motion.

Now, in the aftermath of the referendum, the main question is, what’s next? In the following I propose some answers suggested by the new discipline of Cultural Evolution and my research on historical dynamics (Cliodynamics).

My proposal is quite radical.

Rather than trying to fight the disintegrative trend, we should allow it to run its course, destroying the EU as it is now.

But we need a European Union. Thus, what I hope will happen is another integrative project within Europe, one that will learn from the mistakes of the last one.

In other words, the EU is dead; long live a new and better EU.

We live in huge societies of hundreds of millions of people, but we don’t really understand what makes them possible. It is not often appreciated that well-functioning—peaceful, wealthy, and just—societies are possible only on a basis of effective cooperation (for more on this, see Ultrasociety: How 10,000 Years of War Made Humans the Greatest Cooperators on Earth).

The overall trend over the last 10,000 years has been for humans evolving to cooperate in ever larger societies—from living in farming villages of a few hundred people to nation-states of today and even supra-national formations like the EU. But cooperation is fragile. We know from studying history that cooperation tends to go up and down in cycles. Currently, and according to all the indicators, both the United States and the European Union are in a downward, disintegrative, phase of the cooperation cycle.

There are several interlocking reasons why the EU, in particular, has entered the disintegrative phase. Let’s discuss them in turn.

Betrayal of the Elites

The political elites in UK were overwhelmingly in favor of staying, but the majority of the population voted to leave. We see similar gulfs develop between the elites and people in other European countries (notably, Germany). Why? Some answers are suggested by The Revolt of the Elites and the Betrayal of Democracy, published 20 years ago by Christopher Lasch. Lasch’s book is a powerful social critique of the American elites, but many of his charges now apply to the European leaders—self-serving, globalist, and disdainful of people they govern.

This development is, in large part, a result of the spread of the corrosive ideology of neoliberalism from the US to Europe. As the European elites adopted the neoliberal views en masse, it changed their attitudes and behaviors in several ways.

First, neoliberalism freed them to pursue self-serving policies, such as reducing corporate taxes: 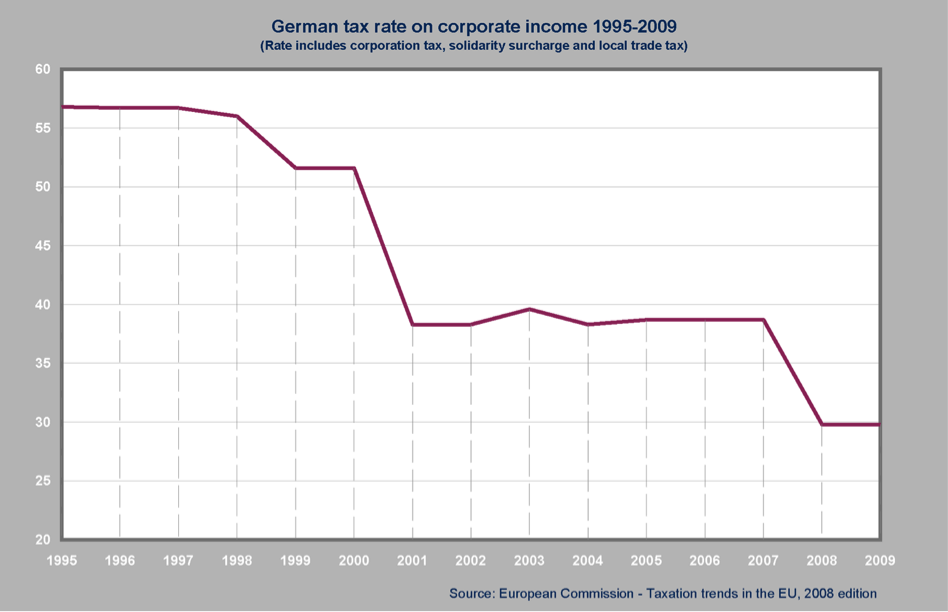 Second, the reference group for European elites became other wealth- and power-holders in Berlin, London, and Washington, not their own populations.

The treatment of Greece last year is a vivid illustration of the new elite behavior. The Greeks were forced to swallow the neoliberal recipe for fixing the mess, in which they found themselves. Note also that it was not the elected (and completely ineffectual) European Parliament that imposed austerity on Greece.

The European Union was born in 1957, when the Treaty establishing the European Economic Community was signed by Belgium, France, Italy, Luxembourg, the Netherlands and West Germany. If you trace the signing countries together on the map, they will closely match the extent of the Carolingian Empire. Why is this important?

Large-scale societies are not simply huge sloshing bags of people. Instead, they’re groups of groups of groups. Unlike ants, humans cooperate in societies that are organized hierarchically. Cooperation is important at all levels: we cooperate in families, we cooperate in towns, we cooperate on a regional level, in nation-states, and supranational organizations, like the European Union or the United Nations. At each level you need an identity. Who is that “us” who is cooperating? Most people have multiple nested identities, for example, one can be an Ingoldstadter, Bavarian, German, and European. We are interested in cooperation at the level above the nation-state. So where do supranational identities come from?

In my cultural evolutionary view, such identities come from very deep history. Often, they are “ghosts” of powerful and prestigious empires that are long gone—“charter polities”, to use a term proposed by the historian Victor Lieberman in Strange Parallels. For the European Union such a charter polity is the Carolingian Empire (eighth and ninth centuries AD).

After the Carolingian Empire broke apart it left behind the idea of Europeanness that still survives today, although naturally it underwent a lot of evolution in the last thousand years. Initially the idea of Europe was known as Latin Christendom (note that excludes the Orthodox Christian areas as well as Islam). Latin Christendom had two important unifying institutions, Empire and Papacy. Of course, the French and Germans fought each other all the time, but when they were faced with outsiders (for example, during the Crusades), they actively cooperated with each other.

There were internal tensions within the precursor of the EU, the European Economic Community, but initially these problems were resolved in cooperative manner. But then, and especially after the collapse of the Soviet Union, the EU started acting as a typical expansionary empire, gobbling up more and more states. This is a typical imperial disease, known in historical sociology as “imperial overstretch.” The problems mounted, willingness to cooperate waned, and the integrative trend reversed itself. In addition to the spread of neoliberalism, which, as I stated above, is an ideology corrosive of cooperation, different EU members found it difficult to cooperate with each other, because they did not share a well-defined common identity. Additionally, different groups evolve different institutions that promote cooperation. This is why, as the political scientist Robert Putnam found, ethnically diverse groups find it more difficult to cooperate. It’s a coordination problem.

Bavarian Finance Minister Markus Söder recently expressed this idea as follows: “In southern Europe, there are notions of solidarity that differ from ours.”

Identities are not fixed in stone; they evolve. The idea of Europeanness has evolved quite a lot since the day of Charlemagne. But evolution takes time. You cannot build an identity and a common set of institutions in one fell swoop. The rapid expansion of the European Union far beyond the area where Europeanness was born (the Carolingian Empire) was, in my opinion, a big mistake. Positive social change is gradual and slow; it’s breaking apart that can occur quite rapidly.

But breaking apart is also an important aspect of social evolution. When social formations become dysfunctional they must be somehow swept away and be replaced with more cooperative formations. After all, that’s how free market economics works. Unprofitable firms go belly up, and more efficient ones grab their market share. Joseph Schumpeter called this “creative destruction.” For reasons I explain in Ultrasociety I prefer to reverse the order, “destructive creation”.

In the past, political formations—chiefdoms, states, and empire—were usually discarded by violent means, either as a result of external conquest, or of internal revolution and civil war. I very much hope that the dissolution of the European Union will unfold in a non-violent manner. In fact, the faster the political elites decide that the EU must go, the better chances are that it will happen without people getting killed.

I actually don’t expect such an outcome. Instead, over the next years the European elites will invest a lot of effort in trying to reform the European institutions. That effort is likely to fail, for reasons that I have discussed in this article.

What will probably happen is that the EU will gradually fade away by becoming increasingly ineffectual and then irrelevant. A historical example of such a fade is the League of Nations.

Where could a new and better EU come from? There is already some talk about “Core Europe” (Kerneuropa) perhaps consisting of the six founding nations, or some other subset of the EU. Such an incipient supranational political formation has a much better chance of promoting integration in Europe than an attempt to reform the EU as it is now. It can borrow those EU institutions that worked well, and replace the “bad” ones with new versions.

Much has been learned during the last 60 years. But the architects of the new Europe should not limit their sights to the past experience of just Europe and only the last six decades. We have a rich history of human attempts to build large-scale societies over the last 10,000 years. The rise of the new discipline of Cultural Evolution, which uses evolutionary theories and historical data (see Seshat: Global History Databank), provides us with new tools and ideas for evolving peaceful, prosperous, and just societies.

Peter Turchin is an evolutionary anthropologist at the University of Connecticut and Vice President of the Evolution Institute. He is author of Ages of Discord. Web site: http://peterturchin.com/ Twitter: @Peter_Turchin
Share This Article
Share with your friends
Submit