By Nick Hanauer and Eric Liu

Most people would consider radical libertarianism and communism polar opposites: The first glorifies personal freedom. The second would obliterate it. Yet the ideologies are simply mirror images. Both attempt to answer the same questions, and fail to do so in similar ways. Where communism was adopted, the result was misery, poverty and tyranny. If extremist libertarians ever translated their beliefs into policy, it would lead to the same kinds of catastrophe.

Some, such as the Koch brothers, are economic royalists who repackage trickle-down economics as “libertarian populism.” Some are followers of Texas Senator Ted Cruz, whose highest aspiration is to shut down government. Some resemble the anti-tax activist Grover Norquist, who has made a career out of trying to drown, stifle or strangle government.

Yes, liberty is a core American value, and an overweening state can be unhealthy. And there are plenty of self-described libertarians who have adopted the label mainly because they support same-sex marriage or decry government surveillance. These social libertarians aren’t the problem. It is the nihilist anti-state libertarians of the Koch-Cruz-Norquist-Paul (Ron and Rand alike) school who should worry us.

Like communism, this philosophy is defective in its misreading of human nature, misunderstanding of how societies work and utter failure to adapt to changing circumstances. Radical libertarianism assumes that humans are wired only to be selfish, when in fact cooperation is the height of human evolution. It assumes that societies are efficient mechanisms requiring no rules or enforcers, when, in fact, they are fragile ecosystems prone to collapse and easily overwhelmed by free-riders. And it is fanatically rigid in its insistence on a single solution to every problem: Roll back the state!

Communism failed in three strikingly similar ways. It believed that humans should be willing cogs serving the proletariat. It assumed that societies could be run top-down like machines. And it, too, was fanatically rigid in its insistence on an all-encompassing ideology, leading to totalitarianism.

Radical libertarianism, if ever put into practice at the scale of something bigger than a tiny enclave, would also be a disaster.

We say the conditional “would” because radical libertarianism has a fatal flaw: It can’t be applied across a functioning society. What might radical libertarians do if they actually had power? A President Paul would rule by tantrum, shutting down the government in order to repeal laws already passed by Congress. A Secretary Norquist would eliminate the Internal Revenue Service and progressive taxation, so that the already wealthy could exponentially compound their advantage, as the programs that sustain a prosperous middle class are gutted. A Koch domestic policy would obliterate environmental standards for clean air and water, so that polluters could externalize all their costs onto other people.

Radical libertarians would be great at destroying. They would have little concept of creating or governing. It is in failed states such as Somalia that libertarianism finds its fullest actual expression.

Some libertarians will claim we are arguing against a straw man and that no serious adherent to their philosophy advocates the extreme positions we describe. The public record of extreme statements by the likes of Cruz, Norquist and the Pauls speaks for itself. Reasonable people debate how best to regulate or how government can most effectively do its work — not whether to regulate at all or whether government should even exist.

The alternative to this extremism is an evolving blend of freedom and cooperation. The relationship between social happiness and economic success can be plotted on a bell curve, and the sweet spot is away from the extremes of either pure liberty or pure communitarianism. That is where true citizenship and healthy capitalism are found.

True citizenship enables a society to thrive for precisely the reasons that communism and radical libertarianism cannot. It is based on a realistic conception of human nature that recognizes we must cooperate to be able compete at higher levels. True citizenship means changing policy to adapt to changes in circumstance. Sometimes government isn’t the answer. Other times it is.

If the U.S. is to continue to adapt and evolve, we have to see that freedom isn’t simply the removal of encumbrance, or the ability to ignore inconvenient rules or limitations. Freedom is responsibility. Communism failed because it kept citizens from taking responsibility for governing themselves. By preaching individualism above all else, so does radical libertarianism.

It is one thing to oppose intrusive government surveillance or the overreach of federal programs. It is another to call for the evisceration of government itself. Let’s put radical libertarianism into the dustbin of history, along with its cousin communism.

Republished with the permission of the authors.

Orthodox Economics Is Empirically Invalid and Theoretically Flawed. Bring on Complexity Economics.
Why Unrest and Political Violence Is Predicted to Peak in the 2020s
How to Pay for Universal Basic Income
David Brin: The Ultimate Answer to “Government is Useless” 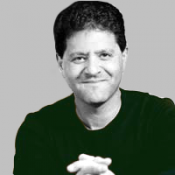 Nick Hanauer is a founder of Second Avenue Partners, a venture capital company in Seattle specializing in early-stage startups and emerging technology. Eric Liu is the founder of Citizen University and a former White House speechwriter and deputy domestic policy adviser to President Bill Clinton. Follow them on Twitter at @NickHanauer and @EricPLiu
Share This Article
Share with your friends
Submit