Management thinking is in a rut.  This is a harsh thing to say, but it must be said.  Despite all the great brainpower being applied, the field of management is failing to provide the empirical, grounded, actionable guidance that organizations require in today’s economy.

How is that so? It’s because traditional tools of management lack an “ecological systems” point of view for thinking about organizational development. Leaders today have to understand how ideas grow in the context of their environments if they want to create economic value successfully and sustainably.

Most of what passes for novel thinking in management now is merely the slapping of new labels onto old ideas.  Or worse, faddish exhortations.  Yes, there continue to be huge numbers of business books and articles published every year.  Some of them are interesting.  Some of them add incremental value.  Most of them, however, are neither interesting nor add great value.  And none of them has truly shaped the industry profoundly, the way that Michael Porter or W. Edwards Deming accomplished decades ago.

So why is this?  Have all great management concepts already been discovered?  Has business strategy become commoditized forever?

The rut is not the fault of management thinking itself.  It’s deeper than that.  In fact, the failure of management thinking cuts to the heart of what we humans understand—or fail to understand—of our own economic lives.  Through my work with numerous organizations—small and large, private and public, for-profit and non-profit—I’ve arrived at some perhaps surprising conclusions.

What we have not fully captured—as a human species—is the systemic process by which we turn ideas into useful things.  On one hand, the traditional techniques of business administration have provided managers with tools for analytical strategy and rigorously quantified decision-making.  On the other, businesses today are creating so much real-world value by turning decentralized ideas into innovative products and services, based on fuzzy notions like culture and creativity.  You can think of it as a clash between two opposing worldviews.  The battle might be described as rigor versus intuition.  Hard versus soft.  Or even numbers versus people.

This is not a new phenomenon.  Walter Kiechel, author of Lords of Strategy: The Secret Intellectual History of the New Corporate World, puts it in historical context:

There are observers who maintain that much of what goes on in business organizations comes down to a struggle between those who see the enterprise largely through the lens of the numbers—sales figures, costs, budgets—and those who focus instead primarily on people, their energies, ambitions, and limitations.  A gross oversimplification, of course, but one that approximates the argument between the two schools of strategy….  What we would be looking for in an alternative to the strategy model—a unified theory of management, if you will—would be a construct addressing each of the issues a company faces in dealing with people: how they were to be selected, trained, disciplined, compensated, motivated, managed, and led…

We can readily understand numbers, but we struggle mightily to understand people.  In other words, the soft stuff is hard .

Here’s a simple diagram I’ve created, inspired by my collaboration with Stanford scholar Ade Mabogunje.  It attempts to incorporate the two clashing worldviews and explain how they interrelate.  It’s a proposed unified theory of management to show why so many good ideas fail to grow, why old businesses often die, and why certain businesses can thrive. 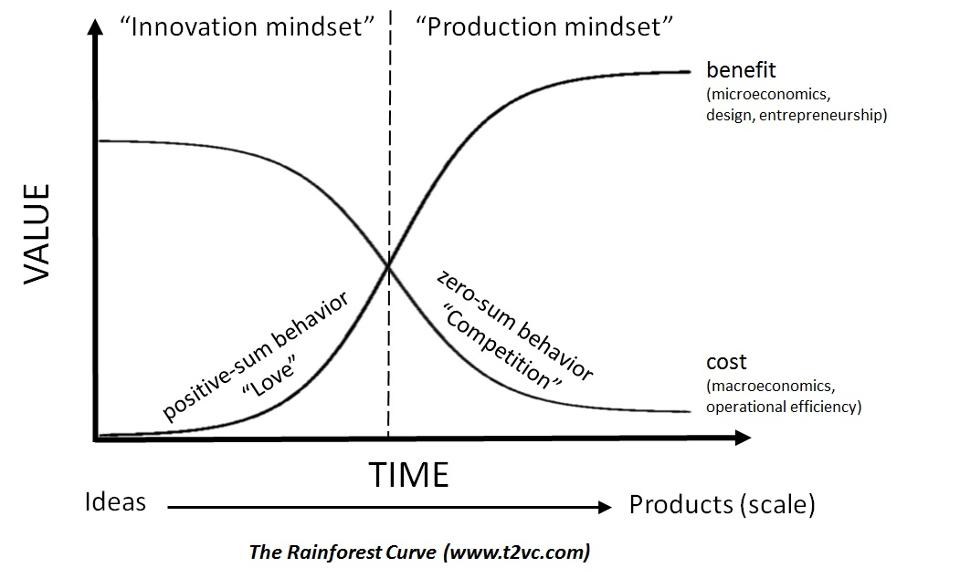 I call this diagram the Rainforest Curve.  As ideas grow into products, from left to right, their beneficial value to someone increases.  That’s the upward curve extending from the bottom left to the top right.  The process of value creation is driven by positive-sum behaviors, like collaboration, team-building, and shared risk-taking.  Think of the passion that a startup team invests in building their company.

You see this behavior manifested in real life by entrepreneurs, designers, inventors, artists, researchers, and innovators.  As ideas grow, however, they cross a downward-sloping cost curve, which exerts real-world constraints.  Those constraints include capital limitations, finite labor, or scarce resources.  The cost curve is driven by zero-sum behaviors, like competition and squeezing out inefficiencies.  Reducing the cost curve is what originally gave birth to the field of business strategy, as Kiechel chronicles.

The intersection, where the curves meet, is like an invisible brick wall.  Most new ideas, great breakthroughs, and startup companies die on the left.  Most aging institutions, corporations, and governments die on the right.  The crossover is the hardest part.

Each of the two columns above is a sound worldview.  They are valid in their own right.  However, upon reflection, you realize that the two columns are perfectly opposed, item by item.  And they lead to opposite results.  The rules on the right side lead to productivity, efficiency, and predictability.  The rules on the left side lead to creativity, serendipity, and uncertainty.  Neither set of rules is wrong.  The opposite of “trust” is not simply “distrust.”  The opposite of “excel” is not simply “do a bad job.”  People tend to see their own value choices as positive, not negative.

We can simplify these opposing social contracts even more, reducing them to the essential values being expressed.  Each value below correlates to the corresponding rule above.

Good ideas fail because they cannot cross the cultural barrier between innovation and production.  Silicon Valley’s success, arguably, comes from embracing the duality of both mindsets.  For example, venture capitalists in the Valley must deal with hard numbers, but they’re also open to the idea that the next billionaire is a college dropout wearing a hoodie.  You never know the next Zuckerberg, so keep your mind open.  Put it another way: how well do your suits and hoodies get along?   That’s dualistic thinking.

So what’s the future of management thinking?  Despite recent history, I have faith that a revolution in management thinking is coming soon.  Looking at the broader trend lines, we are starting to see the innovation cycle as a whole system, to understand the normative behaviors that undergird this cycle, and to construct practical tools to measure and accelerate the curve as ideas grow into reality.

In other words, a paradigm shift is fast approaching. It’s no longer enough to focus only on what’s easy to quantify—the traditional industrial approach. Managers and investors who know how to lead businesses as evolutionary processes—embedded in ecosystems—are most likely to succeed in the new paradigm.