One of the first experiments to test the hypothesis that teaching economics is debasing people’s morality was conducted by Gerald Marwell and Ruth E. Ames. They designed a game where participants were given an allotment of tokens to divide between a private account and a public fund. If every player invested all of their tokens in the public fund, they would all end up with a greater return than if they had all put their money into their respective private accounts. However, if a player defected and invested in the private account while the other players invested in the public fund, she would gain an even larger return. In this way, the game was designed to promote free-riding: the socially optimal behavior would be to contribute to the public fund, but the personal advantage was in investing everything in the private fund (as long as the others did not catch on or make the same move).

Marwell and Ames found that most subjects divided their tokens nearly equally between the public and private accounts. Economics students, by contrast, invested only 20 percent of their tokens in the public fund, on average. This tendency was accompanied by a difference in the moral views of the economists and non-economists. Three quarters of non-economists reported that a “fair” investment of tokens would necessitate putting at least half of their tokens in the public fund. A third of economists didn’t answer the question or gave “complex, uncodable responses.” The remaining economics students were much more likely than their non-economist peers to say that “little or no contribution was ‘fair’.”

Finally, researchers had both economics and non-economics students fill out two “honesty surveys” — one at the start of the semester and one at the conclusion — regarding how likely they were to either report being undercharged for a purchase or return found money to its owner. The authors found that, after taking an economics class, students’ responses to the end-of-the-semester survey were more likely to reflect a decline in honest behavior than students who studied astronomy.

Other studies supported these key findings. They found that economics students are less likely to consider a vendor who increases the price of bottled water on a hot day to be acting “unfairly.” Economics students who played a lottery game were willing to commit less of their potential winnings to fund a consolation prize for losers than were their peers. And such students were significantly more willing to accept bribes than other students. Moreover, economics students valued personal achievement and power more than their peers while attributing less importance to social justice and equality.

Although the entering economics students for both classes reported similar levels of dishonesty scores at the start of the class, by the end, those in the class with a focus on game theory reported significantly higher levels of dishonesty scores than their peers. Such results show that it is not just selection that is responsible for the reported increase in immoral attitudes.

The problem is not only that students are exposed to such views, but that there are no “balancing” courses taught in typical American colleges, in which a different view of economics is presented. Moreover, while practically all economic classes are taught in the “neoclassical” (libertarian, self centered) viewpoint, in classes by non-economists — e.g., in social philosophy, political science, and sociology — a thousand flowers bloom such that a great variety of approaches are advanced, thereby leaving students with a cacophony of conflicting pro-social views. What is needed is a systematic pro-social economics, that combines appreciation for the common good and for others as well as for the service of self.

With permission from the author, originally published here.

The Making of “Rethinking the Theoretical Foundation of Economics”
Why Wealth Is Determined More by Power Than Productivity
My Advice to an Aspiring Economist: Don’t Be an Economist
Economist's Open Letter to Economists About Race 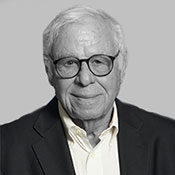 Amitai Etzioni is Professor of International Relations, George Washington University. He is the Director of the Institute for Communitarian Policy Studies. From 1987-1989, he served as the Thomas Henry Carroll Ford Foundation Professor at the Harvard Business School.
Share This Article
Share with your friends
Submit