Markets typically react more to economic fundamentals than politics. But these are not typical times, and our economic future is deeply entangled with the political economy.

Donald Trump’s presidential victory fundamentally challenges the future of globalization and status quo capitalism. Indeed, the fact that Trump grabbed an unexpected share of minority vote, as well as some college educated women, speaks to the fact that economic anxiety is about more than just income levels. It’s about the fact that a large percentage of the population feels that we have a rigged economic system that disproportionately benefits the US and global elite. Nevermind that Trump is one of those elites. He ran as a challenger to Hillary Clinton, the ultimate establishment political figure and sold the electorate on the idea that he was the face of change.

How did we get here? Despite the economic progress made since 2008, our current recovery has been the longest, slowest one of the post World War II era, and the level of inequality is as high as it has been since the Gilded Era. The key reason is something that neither candidate in the 2016 cycle addressed fully – the fact that the financial markets themselves are no longer supporting business, and thus, economic growth.

Why is this? Because the financial industry has, according to a large body of data, grown too large and too far removed from its original mission of investing in new, productive ventures. This illness has a name: academics call it financialization. It’s a term for the trend by which Wall Street and its way of thinking have come to reign supreme in America, permeating not just Wall Street but all American business.

It includes the growth in size and scope of finance and financial activity in our economy (which has doubled since the 1970s), to the rise of debt-fueled speculation over productive lending, to the ascendancy of shareholder value as the sole model for corporate governance (and the short term pressure that puts on companies), to the enormous political power of the financial lobby. It’s a shift that has even affected our language, our civic life, and our way of relating to one another. We speak about human or social “capital” and securitize everything from education to critical infrastructure to prison terms, a mark of our burgeoning “portfolio society.”

This isn’t the way it was supposed to be. Market capitalism, as envisioned by Adam Smith, was supposed to funnel our collective savings into productive investment, via the banking system. But today, deep academic research shows that only around 15% of the money flowing from financial institutions actually makes its way into business investment. The rest gets moved around a closed financial loop, via the buying and selling of existing assets, like real estate, stocks, and bonds.

It’s a cycle that increases inequality, since the top quarter of the population owns the vast majority of those assets (witness the disconnect between the markets and Main Street, which has fueled much of the populist sentiment in the election cycle).

The financial sector — including everything from banks, to hedge funds to mutual funds to insurance to trading houses — represents around 7% of the economy. Yet it creates only 4% of all US jobs, and takes 25% of all private sector profits. While a healthy financial system is crucial for growth, research by numerous academics as well as institutions like the Bank of International Settlements and the International Monetary Fund shows that when finance gets that big, it starts to suck the economic air out of the room – and in fact, the slower growth effect starts happening when the sector is half the size it is today in the US.

It’s crucial that we tackle this issue to ensure not only more sustainable growth, but more stable politics. A recent Harvard survey found that only 19 % of millenials, now the largest voting bloc in the country, consider themselves “capitalists.” Ironically, our next president—an investor known for highly leveraged real estate deals — has been one of the biggest beneficiaries of our financialized system.

Yet if the next administration doesn’t take serious steps to reconnect the markets to Main Street, we will find ourselves in the same slow growth economy in four years. Only this time, the politics will be even more extreme—and there may be new outsiders to challenge the status quo. 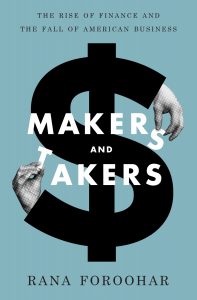 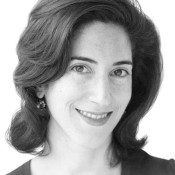 Rana Foroohar is Global Business Columnist and an Associate Editor at the Financial Times, based in New York. She is also CNN’s global economic analyst. Her book, “Makers and Takers: The Rise of Finance and the Fall of American Business” (Crown), about why the capital markets no longer support business, was shortlisted for the Financial Times McKinsey Book of the Year award in 2016.
Share This Article
Share with your friends
Submit