There’s a serious disconnect today in America between political discourse and economic reality. I find it disturbing. If you follow the headlines, the nation is embroiled in a civilizational battle between liberals who seek to impose political correctness and build an authoritarian state, on one hand, versus conservatives who seek to perpetuate inequality and minority repression, on the other. It has become a battle of caricatures.

More importantly, it does not reflect what is actually happening on the ground. You know, reality. It’s that place where real people are building real things. Based on my experience in Silicon Valley, I’d like to propose a different way to think about the intersection of economics and politics in America.

I’m fortunate to get an uncommon perspective in my professional life, because I work at both the micro and the macro levels. On the micro level, I’m an entrepreneur who starts and invests in new companies, including one that makes the world’s most powerful filter to remove harmful germs from drinking water. On the macro level, I work with cities, companies, and countries to design economies that accelerate the pace of innovation and value creation. Because I straddle two worlds, I tend to see hidden nuance, where others might see simplicity.

American politics has surely become an oversimplified battlefield. Each side portrays the other in comical terms. Here is how conservatives, like Ross Douthat in a recent NYT column, often see the battle lines:

For another example, let’s take the ideas of writer Ayn Rand. Rand argued that rational selfishness is a virtue. She felt that morality that is not rational diminishes life and happiness. Rand has experienced a popular boomlet in recent years. Many politicians and business leaders have embraced her ideas. Liberals, for their part, have readily accepted her as a foil. Again, a simple binary choice.

But Rand’s ideas don’t fit the reality I work in. They bifurcate the world too cleanly. Here’s a different, more nuanced way to describe the world. 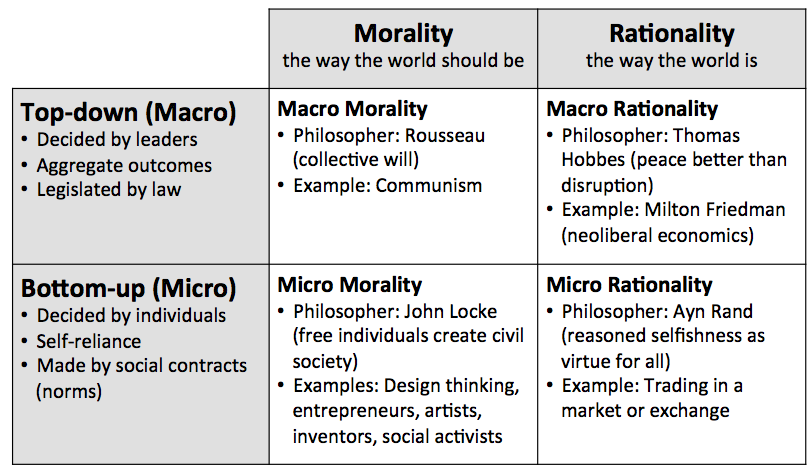 Like all graphs, this is an oversimplification of reality, but it highlights some critical distinctions. (For political geeks, I’ve taken the “liberty” of adding the political philosophers that might be associated with these quadrants, namely Locke, Hobbes, Rousseau, and Rand.)

On the horizontal axis, we see the division between morality and rationality. Morality is about pursuing “the way the world should be.” Rationality is about dealing with “the way the world is.” You can hear echoes of America’s liberal-conservative divide here.  On the vertical axis, we see the division between top-down and bottom-up views of the world. Bottom-up is about individuals and their interactions with one another. Top-down is about managing institutions, whether companies, cities, or entire countries.

So what’s the point, you might be asking? If our goal is to maximize economic wealth, it’s increasingly clear that two of these quadrants matter more than the other two. Scientific research shows that innovative economies thrive in the bottom-left and the top-right. Entrepreneurship happens in the bottom-left, where individuals organize dynamically into teams to solve problems. Highly entrepreneurial environments are what we call “Rainforest” ecosystems. But ideas become scalable products on the top-right: in environments with high predictability and low operational costs. We call those systems “Plantations.” I’ve written about this in prior columns (for example, see links here, here, and here). 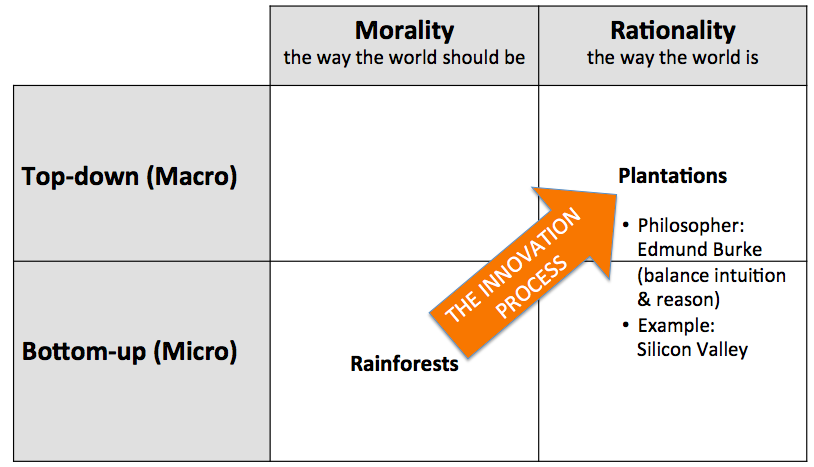 New ideas, startups, and solutions are birthed on the bottom-left. Ideas that replicate and become sustainable must scale to the top-right. The crossover is hard. It’s not a leap; it’s a chasm. And it’s not just a political chasm between left and right. It’s the business chasm between innovation and production. Silicon Valley doesn’t call the process of launching new products “crossing the chasm” for nothing.

The political philosopher Edmund Burke saw the same thing. Society is a difficult balance between moral motivation and practical constraints.

A man full of warm, speculative benevolence may wish his society otherwise constituted than he finds it, but a good patriot and a true politician always considers how he shall make the most of the existing materials of his country. A disposition to preserve and an ability to improve, taken together, would be my standard of a statesman.

Sounds like the description of a successful entrepreneur to me. So where does that leave Ayn Rand, in the bottom right corner? The truth is that Ayn Rand never built a company. Therefore, she didn’t fully appreciate the essential moral quality of entrepreneurship. Innovation is more than the sum of a series of rational transactions. Without hopeful people who desire to improve the world, however foolish they may be, entrepreneurship will wither. Don’t just take my word for it. Ask Steve Jobs and Mark Zuckerberg.

Rand’s ideas are a useful thinking tool, but she was a product of her time. A refugee from Communism, she despised the imposition of morality by the state. My mother escaped from Communism too, so I am sympathetic to Rand’s point of view.

But the real world is not a simple binary. America’s political discourse is problematic, because it ignores the real economic value creation that happens everyday, whether in the Valley or anywhere else. The hopes and dreams and passions of innovators are not frivolous—they are core to the economic system. How they confront and conquer the challenge of bringing new ideas to life is what matters. Helping to build ecosystems that accelerate the entrepreneurial journey was a core reason for me to start the Global Innovation Summit, which attracts over 50 countries seeking the same thing.

So the economy’s life cycle is more nuanced than Ayn Rand realized. Innovators are deeply moral animals, since by definition they envision the future as it should be. In fact, the world would die without such dreamers. People with a vision of how the world can be better are actually the ones who do make the world better.

How Bernie Sanders Was the Only Candidate to Uphold an Essential Pro-Market Principle
Why Groups Fail (Hint: For the Same Reasons that Nations Fail)
How the Dominant Business Paradigm Turns Nice People into Psychopaths
The CEO of Sears Fails His Company by Believing in Ayn Rand and the Invisible Hand