Outrage over how big money influences American politics has been boiling over this political season, energizing the campaigns of GOP nominee Donald Trump and former Democratic candidate Sen. Bernie Sanders alike. Citizens have long suspected that “We the People” increasingly means “We the Rich” at election time.

Yet surprisingly, two generations of social scientists have insisted that wallets don’t matter that much in American politics. Elections are really about giving the people what they want. Money, they claim, has negligible impact on elections.

That was a good line for Cold War propaganda, and good for tenure, too. Corporate titans seized upon it to argue that their money should be freer to flow into political campaigns. Not only billionaires, but academics, too, argued that more money in elections meant more democracy.

Even today, many academics and pundits still insist that money matters less to political outcomes than ordinary citizens think, even as business executives throw down mind-boggling sums to dine with politicians and Super Pacs spring up like mushrooms. The few dissenters from this consensus, like Noam Chomsky, are ignored in the U.S. as “unpersons,” though they are enormously respected abroad.

This is a scandal. It has stymied efforts at campaign finance reform and weakened American democracy.

Political scientist Thomas Ferguson, Director of Research at the Institute for New Economic Thinking, has spent a career setting the record straight with clear empirical evidence in a field where such research has been shockingly rare. Ever since his 1995 book Golden Rule: The Investment Theory of Party Competition blasted through received academic wisdom by showing how wealthy individuals and businesses strategically invest in political parties for the biggest pay off, Ferguson has been the man to seek when you really wanted to know how elections work and who controls them.

White collar criminologist William K. Black and others still recall Ferguson’s famous warning, issued long before the nominating convention in 2008, that the contributions from big finance piling up in Barack Obama’s campaign war chest meant that his promises of sweeping reforms of finance were not to be believed. In 2014, he foresaw the unraveling of America’s two major political parties and predicted that voters feeling betrayed would increasingly abandon both.

“Want a happy ending?” he quips. “See a Disney movie.”

In recent years, Ferguson has often worked with two other talented researchers, Paul Jorgensen and Jie Chen. The three have tracked the generous funding of Obama by high tech businesses engaged in spying on the American public and the waves of money from polluters into the Republican Party.

Now the researchers have turned their attention on political money in Congressional elections (see the newly published paper from the Institute for New Economic Thinking).

They begin with a simple question: What are the facts about total campaign spending and election outcomes? As they write: “We can pool all spending by and on behalf of candidates and then examine whether relative, not absolute, differences in total outlays are related” to the differences in votes received by the major political parties.

Their answer is stunning: there is strong, direct link between what the major political parties spend and the percentage of votes they win – far stronger than all the airy dismissals of the role of money in elections would ever lead you to think, and certainly stronger than anything you read in your political science class.

They show the strength of this relationship through a simple graph. The line going out to the right in the graph shows the Democratic percentage of the total money flowing into the race for the major parties and runs from 0 to 100 percent. The vertical line shows the percentage of the major party vote that the Democrats won. Dots represent individual House races in 2012.

As Ferguson, Jorgensen, and Chen sum up:

“At the bottom left Democrats spend almost no money and get virtually no votes; at the top right, they spend nearly all the money and garner virtually all the ballots, calculated as proportions of totals for the major parties.” 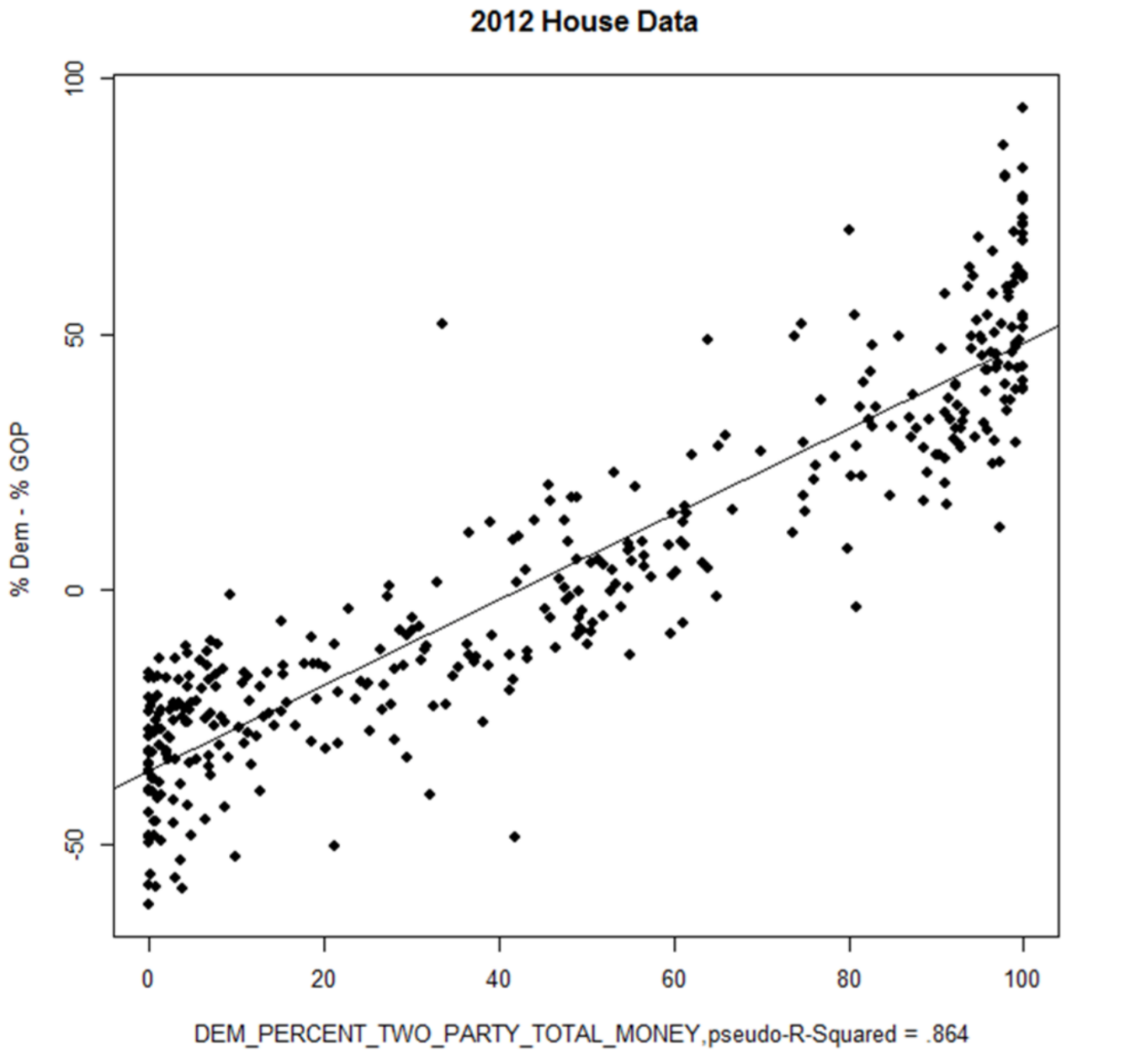 If money and voting outcomes were unrelated, then the dots representing individual House races in 2012 would be scattered all over the square. If they were perfectly related, the dots would all cluster tightly on a line.

Not only in 2012, but in every election for which the data exists (from 1980 to 2012), Ferguson, Jorgensen, and Chen found that the graphs came out with neat, straight lines, with minimal scattering of dots. The link is clear: when the Democrats spend more than Republicans, their candidates win. When Republicans spend more than Democrats, they win.

There was but one exception, the Senate races of 1982, when Senator William Proxmire, whose disdain for fundraising was legendary but who still won elections, brought down the average. Otherwise, with alarming regularity, Democrats and Republicans candidates’ share of the vote was correlated, to an astonishing degree, with the amount money spent in the campaign.

Nothing like this graph has ever made its way into a political science textbook. That it now exists sure should change what Ferguson, Jorgensen, and Chen call the “optics” of the campaign finance discussion. But will it? Does money just follow popular candidates?

Political scientists have long had way out of admitting the implications for democracy of such a direct a relationship between politics and money: the idea that the wealthy tend to spend on the most popular Congressional candidates. Their “influence,” the thinking goes, is thus nothing more than a reflection the will of the people. They don’t force any outcome other than the one that voters would choose. Political scientists call this idea “reciprocal causality.”

Ferguson, Jorgensen, and Chen tackle this issue head on. They use a cutting-edge method invented by Dutch statistician Peter Ebbes and recently studied by Irene Hueter. The researchers find that while reciprocal causation happens, its extent is not large: money‘s effect is direct and powerful.

They confirm their conclusion by using another method now widely employed in finance and economics: they look at published gambling odds on the chances of a Republican takeover of the House in 1994. These are relevant because a huge wave of money swept the Republicans to victory in that election, but the odds never moved very much. The relative lack of change rules out the idea that soaring expectations of victory drove the wave. But the wave, when it came, nevertheless produced a big change in the electoral outcome, just as a money-driven “investment theory” of political parties would predict.

Their paper closes by examining the notion that right wing politics in America has been driven by donations piling up from eccentric entrepreneurs like investor and conservative mega-donor Foster Friess — the sort of people who are widely imagined to populate the Forbes 400 list of wealthiest Americans – rather than mainline big business corporations, such as those on the Fortune 500 list.

On the contrary, the researchers find that “a simple count of firms and investors on Forbes show that the largest American corporations support Tea Party Congressional candidates and organizations supporting the movement, such as Freedom Works, at much higher rates than Forbes 400 members. Even making due allowances for Dark Money, the difference is substantial.”

Evidently American big business firms are not centrist, as many pundits would have it. As Ferguson and his colleagues put it:

“Stories that the steady rightward drift of the American political universe is somehow the work of exceptionally ideological individual entrepreneurs are huge over-simplifications. If the center is not holding in American society — and it rather plainly is not — America’s largest companies are as implicated as anyone else; indeed, perhaps more so.”

This state of affairs explains why economic inequality has grown into a crisis, with social unrest amplified by economic distress. Because of this money-driven system — which has been getting worse since 1970s up to the current dysfunctional mess — when the rich don’t feel like paying taxes, we all suffer. Infrastructure collapses, schoolchildren and sick people suffer, and hard-working citizens are robbed of their fair share of the country’s prosperity and end their lives struggling keep body and soul together.

“It goes without saying that this news is not reassuring; particularly in elections below the federal level – in states and local elections, we suspect, money has come to dominate outcomes to a frightening degree, not least because it is unlikely that the Republican advantage is offset there to the degree that it has been in recent federal elections. If it turns out that the U.S. has entered a Post-Democratic age, the situation will not be improved by social scientists behaving like ostriches. It is time economics, political science, and history recognize the reality of industrial and financial blocs within parties and acknowledge money‘s powerful effects on elections.”

If mainstream social scientists are not pursuing the truth, what exactly are they pursuing? Whatever it is, it does not appear to be good for democracy.

This post originally appeared on the blog of the Institute for New Economic Thinking.

Lynn Parramore is Senior Research Analyst at the Institute for New Economic Thinking. A cultural theorist who studies the intersection of culture and economics, she is Contributing Editor at AlterNet, where she received the Bill Moyers/Schumann Foundation fellowship in journalism for 2012. Twitter: @LynnParramore
Share This Article
Share with your friends
Submit